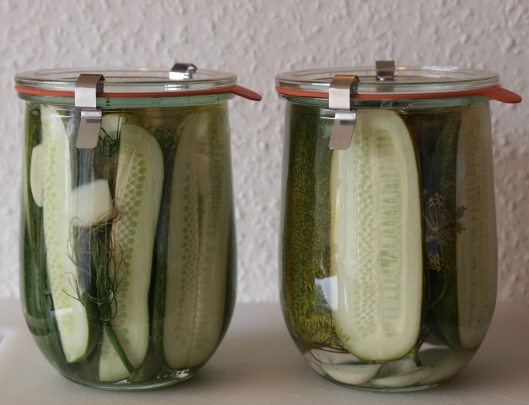 I’ve been craving pickles a lot lately. The crisp, slightly sour and a bit spicy kosher dill type pickles, that you can find without even batting an eyelash in NY but don’t seem to exist where I am living right now in Germany. I wanted a no sugar pickle, just cucumbers, vinegar, dill, salt and of course garlic. This refrigerator pickle recipe is super quick and easy! I like that there is no fuss with canning, they go straight in the fridge and are ready to eat in no time!

I know this sounds awfully cliche but normally I don’t feel the need to consume pickles on almost a daily basis, at least not as much as I have been lately. And maybe you can guess why my consumption and craving for this tasty marinated snack has gone through the roof in the past three months?

You will need to have ready two clean mason jars with lids or other type of glass jar with about a 1 liter capacity.  I used Weck jars. Wash the dill and put two flower heads in each jar along with some additional dill branches if you want. Wash the cucumbers very well with a vegetable brush under running water and then cut off the tip of each cucumber where the stem comes out. If you like spears cut the cucumbers in half lengthwise and then in half again or you can just cut them into halves. Pack the sliced cucumbers into the jars making sure the height of the cucumbers doesn’t exceed the height of the jars (if they do you can just trim a little off the ends until they fit nicely into your jars). Peel and cut each clove of garlic into four slices and pack the wedges of garlic between the sliced cucumbers in the jars. In a medium sized saucepan heat the water, vinegar and salt, stirring to dissolve the salt and bring the mixture to a rolling boil. Once boiling pour the hot liquid over the cucumbers, filling the jars to the very top. Put the lids on securely and when the jars are cool enough to handle transfer them to the fridge. Allow them chill before trying one. I waited about 3 hours and they were good. Overnight and they were even better. Store in the fridge and use within 3 hours and up to 3 days.

7 thoughts on “In a Pickle”