It has been really hot and dry here this summer. In fact I think I can count on one hand the number of times it rained here in the last 4 months so I have been out watering my plants a lot more than I usually do this time of year. The grass in our yard was dead, or dormant, all except for the patches growing near my raised beds and the flower beds that get watered regularly by me. Everything else was so dry that I was completely surprised last month to see that the wild blackberries in our area were thriving, so we decided to go berry picking one Friday afternoon with the kids along a bike path not far from our house.

We managed to pick so many wild blackberries that in addition to eating them as we picked and saving some for eating at home over the next few days I had enough left over to make a berry pie.

It’s been nine years since I made this pie. Nine years. I can’t believe how long it’s been. I was new to blogging then, new to living in a foreign country and new to being a parent. It’s funny how time makes you reflect on things like that. I now have four kids, have been living away from home for over ten years and have been foraging for wild berries here in Germany almost every summer but have only had enough to make this pie twice. Before I even tasted this pie I could still remember exactly how the first one I had made tasted. I just had a birthday too and with another passing year I find that I am more than ever reflecting on the things that are important to me… my family, my friends, hiking, biking, spending time in the garden, cooking, baking, reading, sewing and knitting… and I just recently started doing yoga again and as a gift to myself for my birthday I signed up to take a Yin Yoga class. I made a rhubarb cake for my birthday this year too. I have lots of rhubarb growing in my front-yard garden right now and it came out really tasty. I have made this cake before with other fruits like strawberries, small German plums (Zwetschgen) and even a combination of chocolate, figs and pears. The plum version is my favorite but rhubarb is what I had on hand, since it is growning abundantly in my garden, and I think the tartness of the rhubarb and the custardlike texture of the cake go very well together. If you make this cake or the pie I hope you’ll enjoy them as much as we did!

Mix the dry ingredients together in a large bowl until well combined. Cut tablespoon sized pieces of butter into the flour mixture with a pastry cutter or two butter knives until only small pea sized pieces of butter remain. In a small bowl beat the egg then pour the beaten egg over the butter-flour mixture and with a fork or a large spoon work the egg into the mixture until less crumbly and starts to come together as a dough. Make sure all of the dry flour gets incorporated into the dough and large wet crumbles form, it doesn’t have to come together as one solid dough but should be wet enough to start to stick together. Press into the bottom and sides of a greased pie pan, deep dish tart pan or spring form pan. Cover and let rest in the fridge. Preheat the oven to 180° C (350°F). Separate the eggs and in a large bowl mix the egg yolks with the sugar, and vanilla using a whisk or hand blender, mix until combined. Then blend in the shredded marzipan and the heavy cream. Now add in the flour (or almond flour) and stir to combine. In a separate bowl whip the egg whites until stiff peaks form. Add a third of the whites to the batter and stir them in to lighten the dough. Then gently fold in the rest of the whipped egg whites. Lay out half of the cut up rhubarb on the crust bottom and pour the batter over it. Spread out the other half of the rhubarb evenly over the top of the cake. Bake for 60-75 minutes or until a toothpick inserted in the middle of the cake comes out clean. You may have to tent the cake with foil at some point during the baking process so that the top won’t burn. Let the cake cool and serve with freshly whipped cream on top. Store any leftovers in the fridge. This cake tastes equally as good if not better served cold the next day. Enjoy!

I went berry picking this week. Thomas, Anna and I did actually. Just down the road apiece from where we live there is a large field lined by a hedgerow. And all along the edge of this massive thicket, wild blackberries grow. Lots and lots of large, plump, juicy berries, well guarded by thistle branches and stinging nettle vines, are hidden here. But this was no matter to us. We picked and picked until we were full of scratches and stings and our hands were stained purple from the berry juice and when our container was full, so full I couldn’t fit the lid on it anymore, we went happily home looking forward to the end result this plethora of berries would bring. 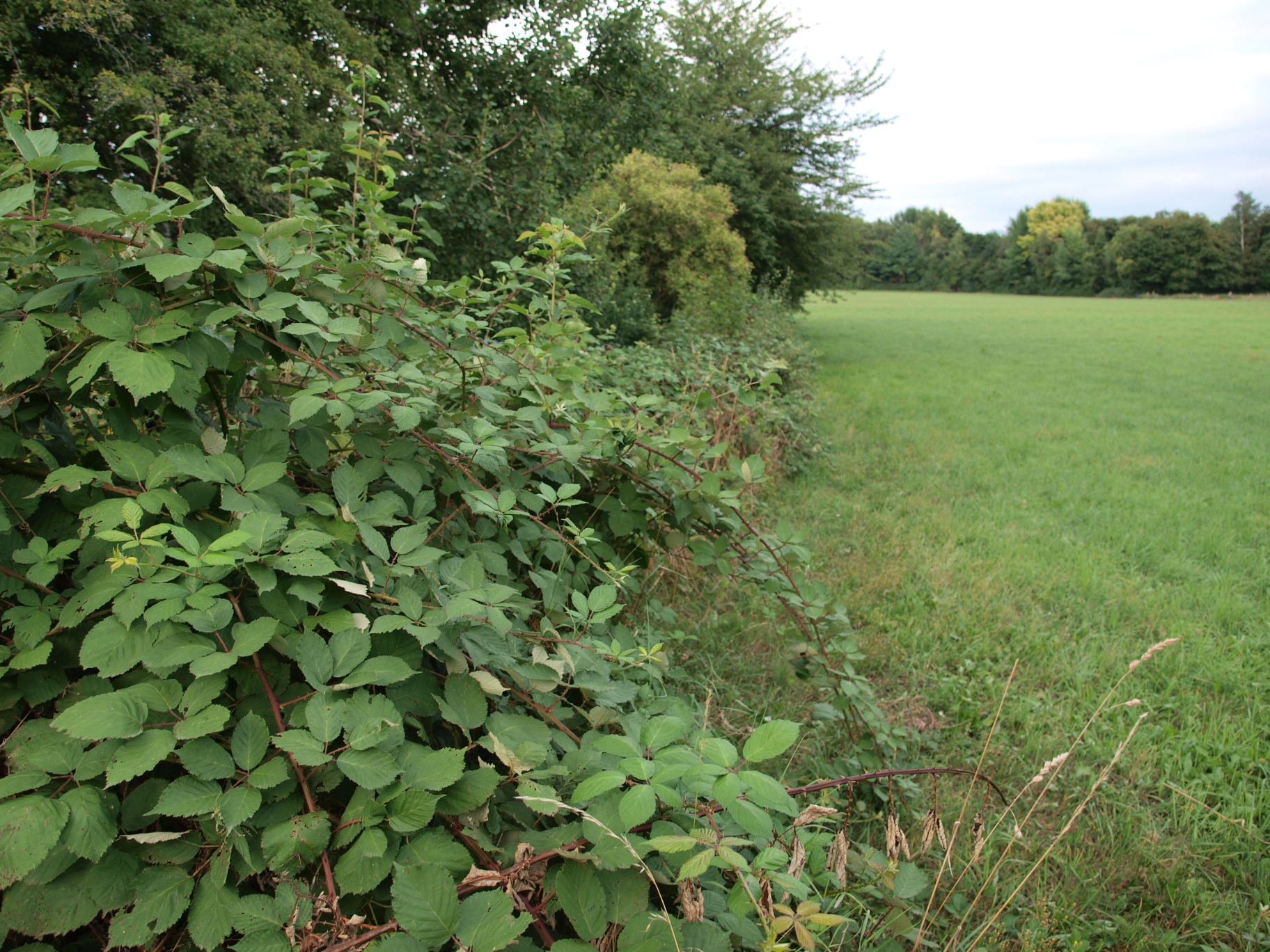 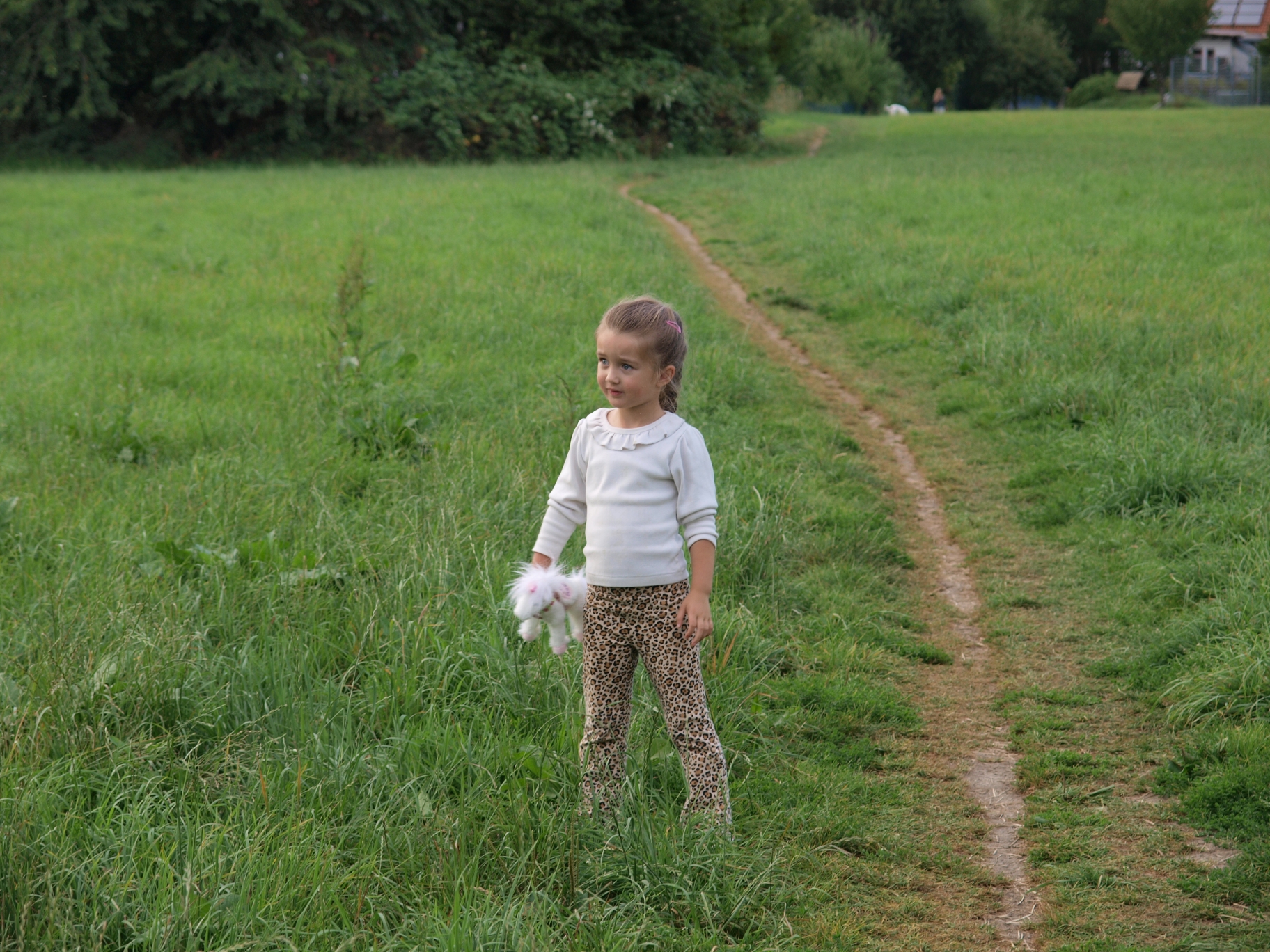 Anna on the hunt for more blackberries… 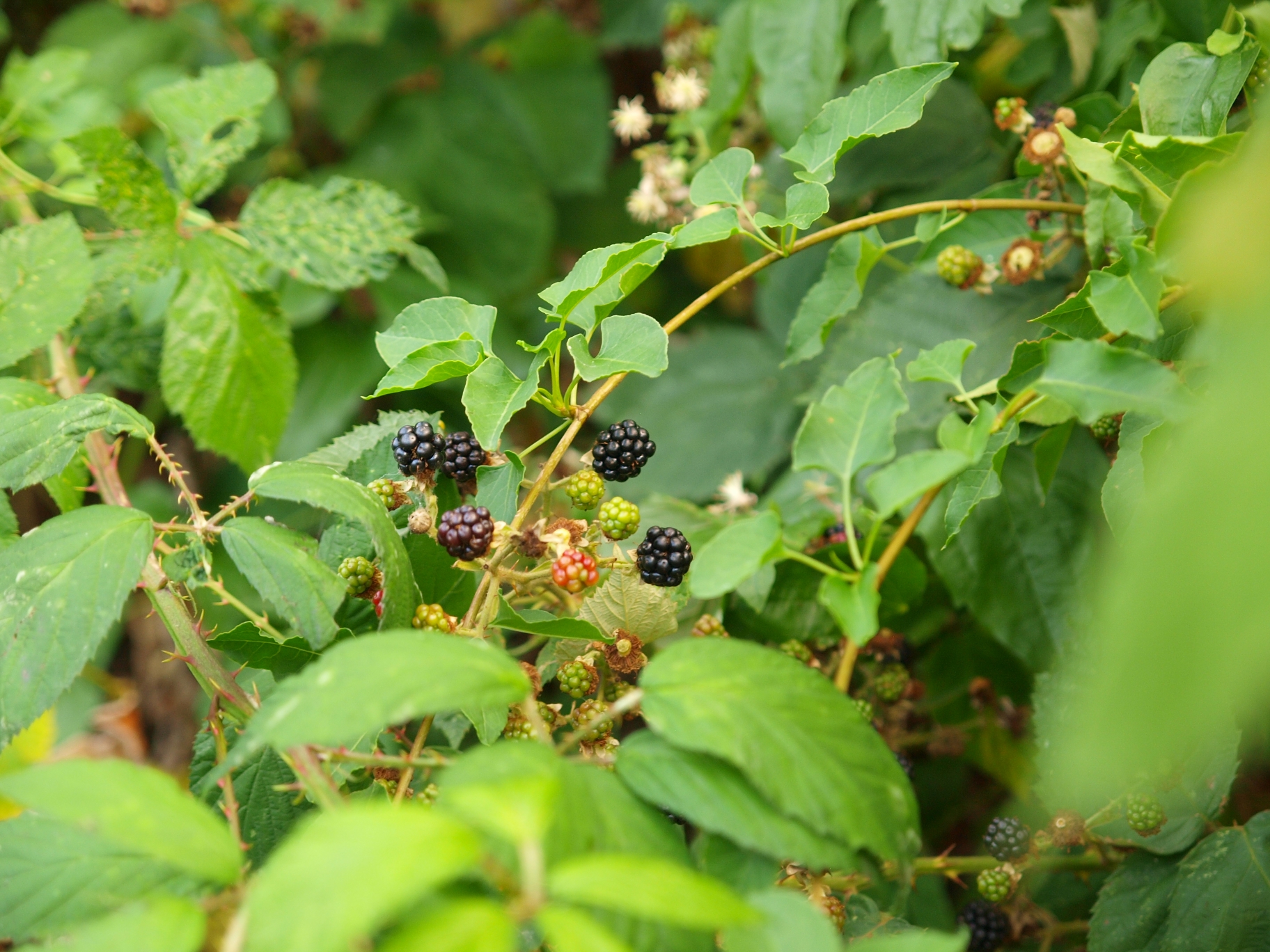 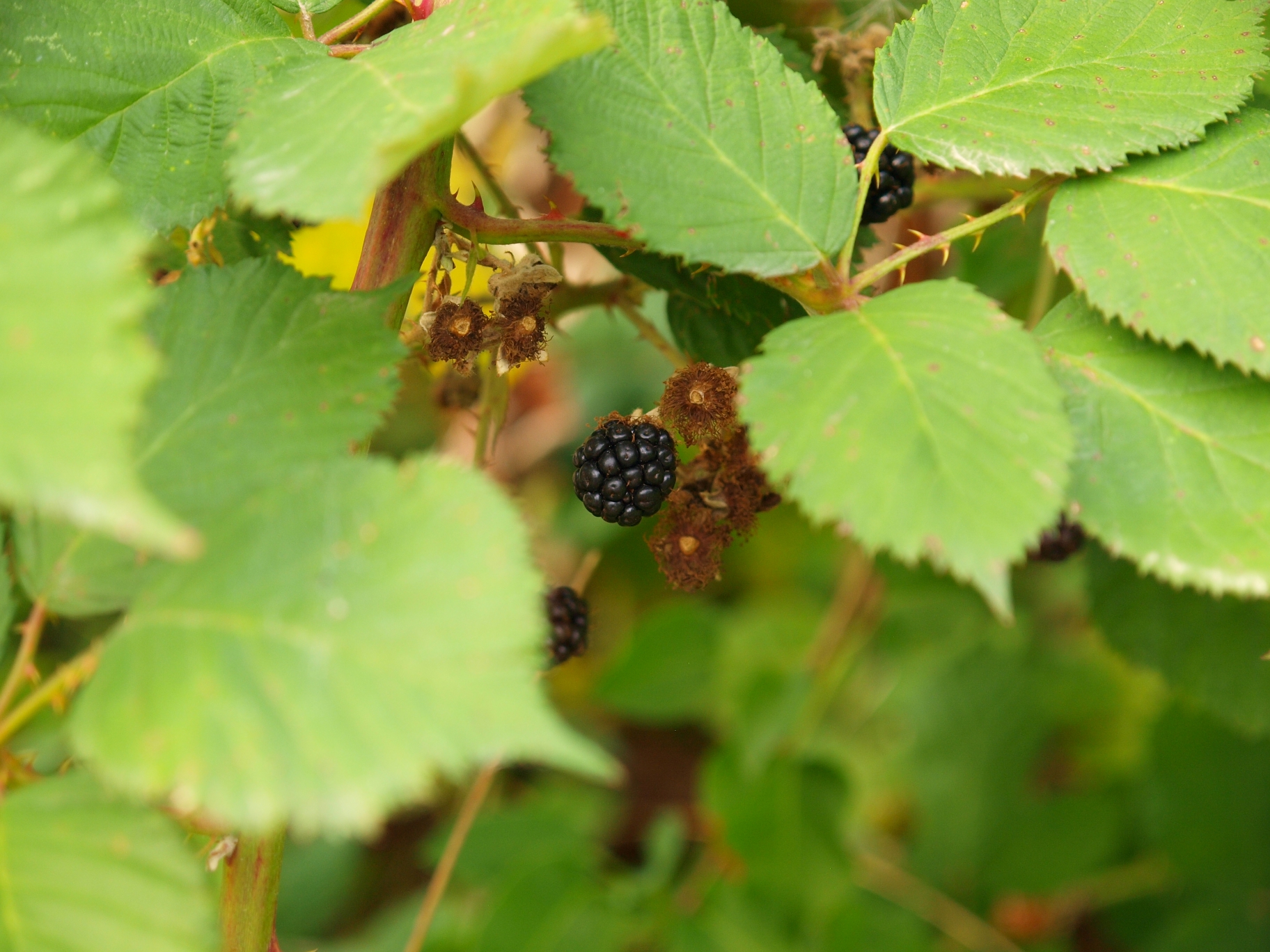 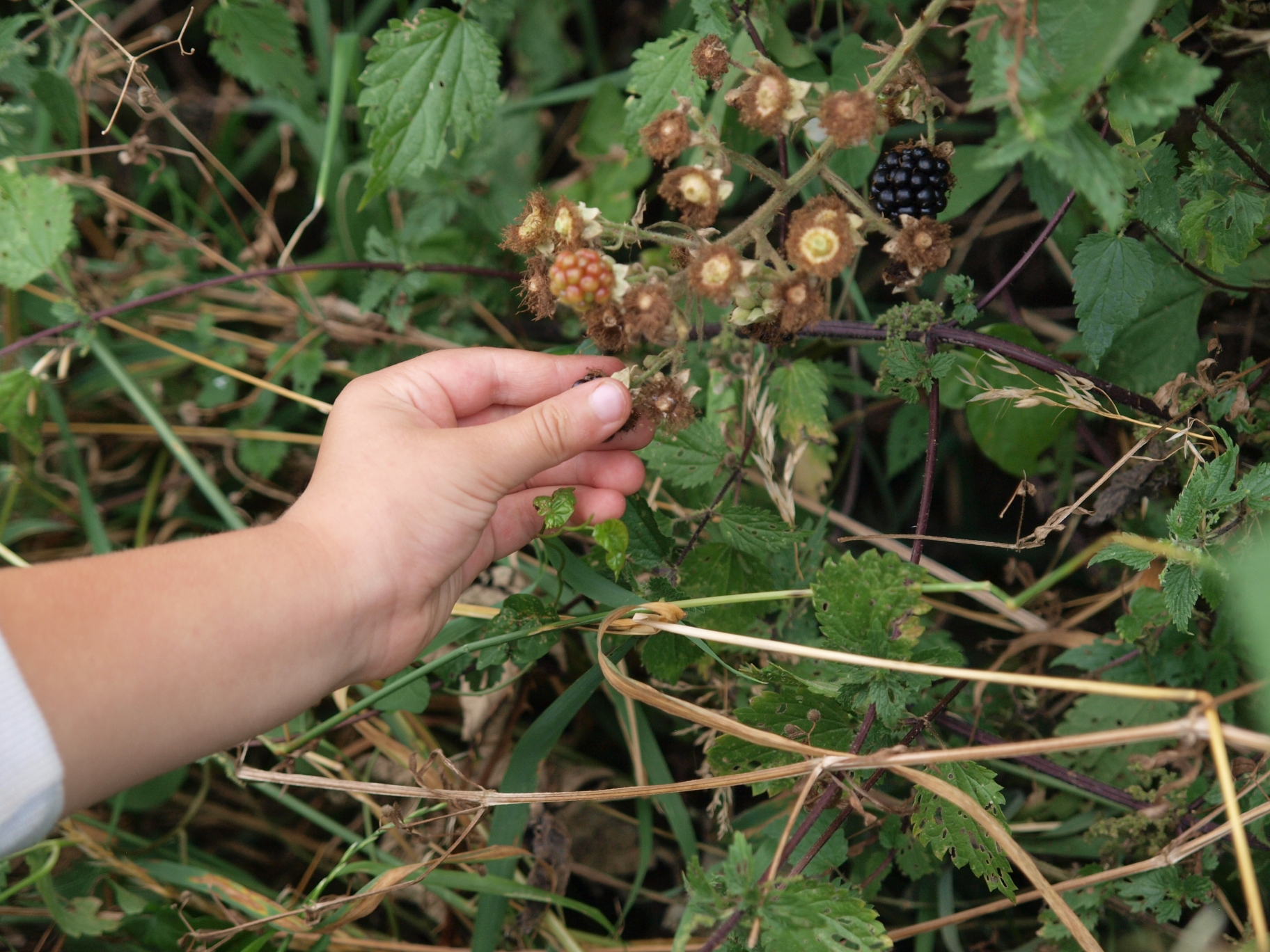 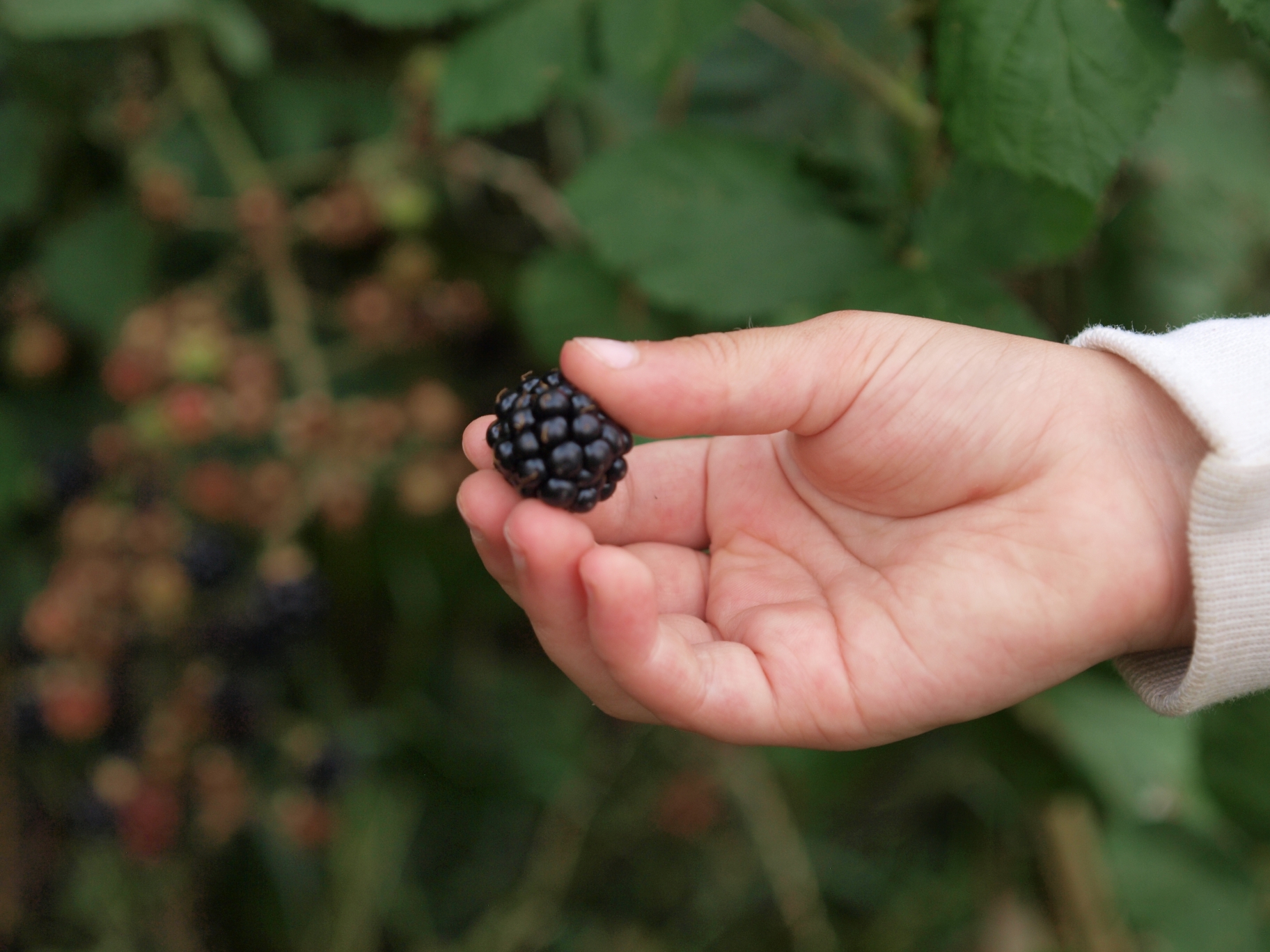 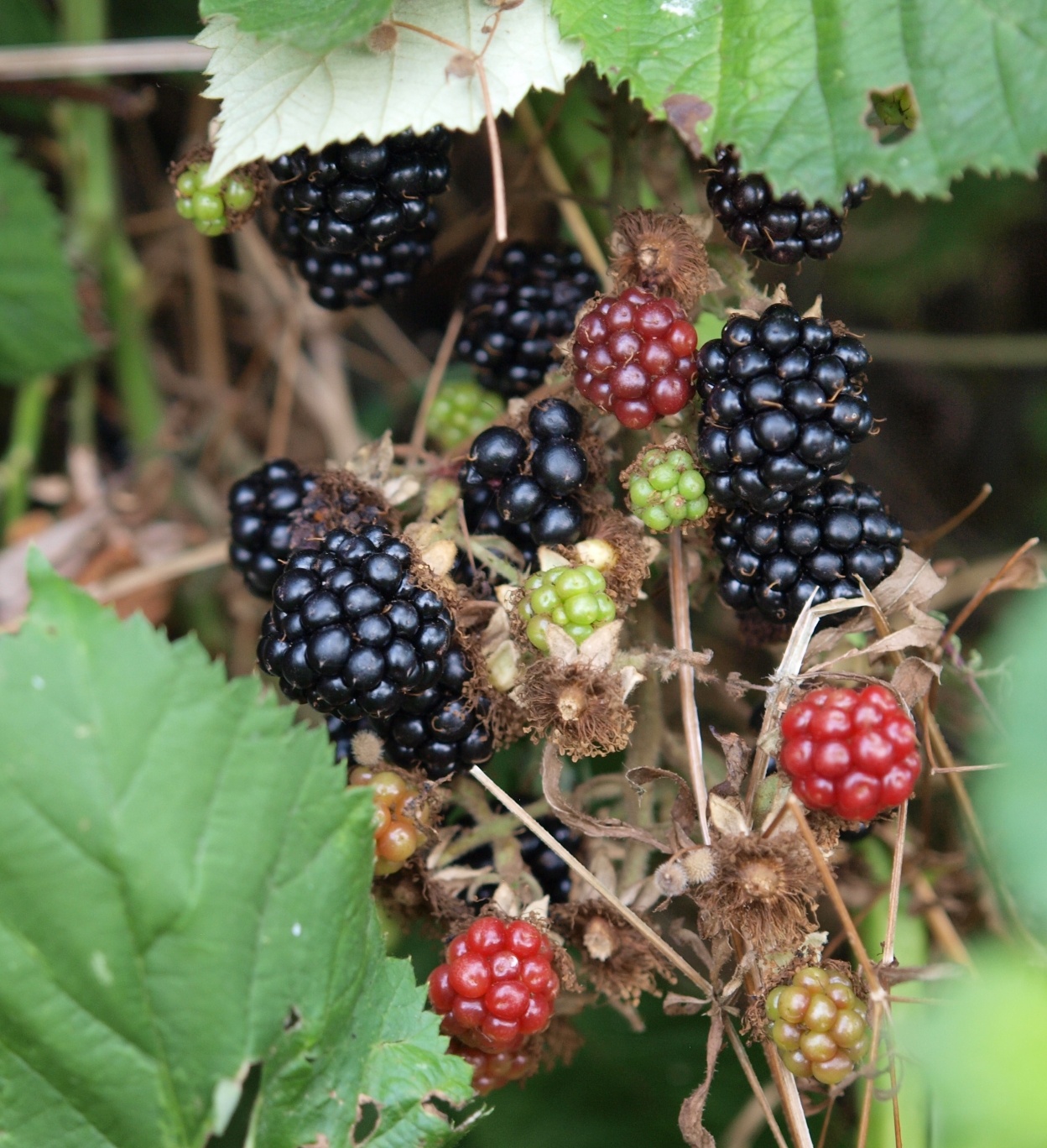 
Make the crust at least an hour ahead of time. Blend flour, sugar, salt and lemon zest in a large bowl. Cut in cold butter with a pastry cutter, two knifes or a food processor until the butter pieces are no larger than the size of a pea. Slowly add the ice water a tablespoon at a time, gently blending it into the flour mixture, adding just enough so that the dough will form into a ball. You don’t want to add too much water so that the dough is sticky but you don’t want it too crumbly either. Don’t over work the dough and mix it with a spoon or fork just well enough so that you can form a ball with your hands. Cut the dough in half and form each half into a flattened circle/disc then wrap each half with plastic wrap or aluminum foil. Allow the dough to rest in the fridge for at least one hour and up to one day.

Preheat the oven to 375° F or 190° C. Gently go through the berries picking out any leaves or bugs (if you picked them yourself) and submerge them in water to remove any debris. Rinse them and allow them to drain in a collendar. Put one cup of berries in a small sauce pan with the sugar, tapioca starch and salt. Heat the berries while stirring and gently mashing with a spoon to release their juices until the mixture comes to a boil. Boil for one minute while stirring constantly, then remove from the heat. In a large bowl combine the berry mixture with the rest of the berries and the lemon juice stirring gently to combine. Roll out one of the two pie crusts and line the bottom of a pie dish with the crust. Roll the second crust out and with a sharp knife cut strips of dough about 3/4 inch (2 cm) wide. You’ll need about 18-20 strips. Pour the filling into the pie plate and cover the berries with the strips of dough using a lattice weave (over and under) pattern. Take the bottom crust and the lattice weave ends together and turn them under, pinching them together and forming a little wall around the pie. Brush the finished crust with milk all over. Bake on the middle rack but put a cookie sheet on a lower rack with baking paper on it, under the pie , to catch any drippings (I did this after about half an hour, when the pie started dripping). Bake for 1 hour or until the filling is bubbling and coming out of the top of the pie. Let the pie rest for at least 1-2 hours before cutting, to allow it to set. Refrigerate after it has cooled to room temperature.
The filling was very soft after about an hour or so out of the oven, but we managed to eat it! The next day it had gelled up and held it’s shape nicely. 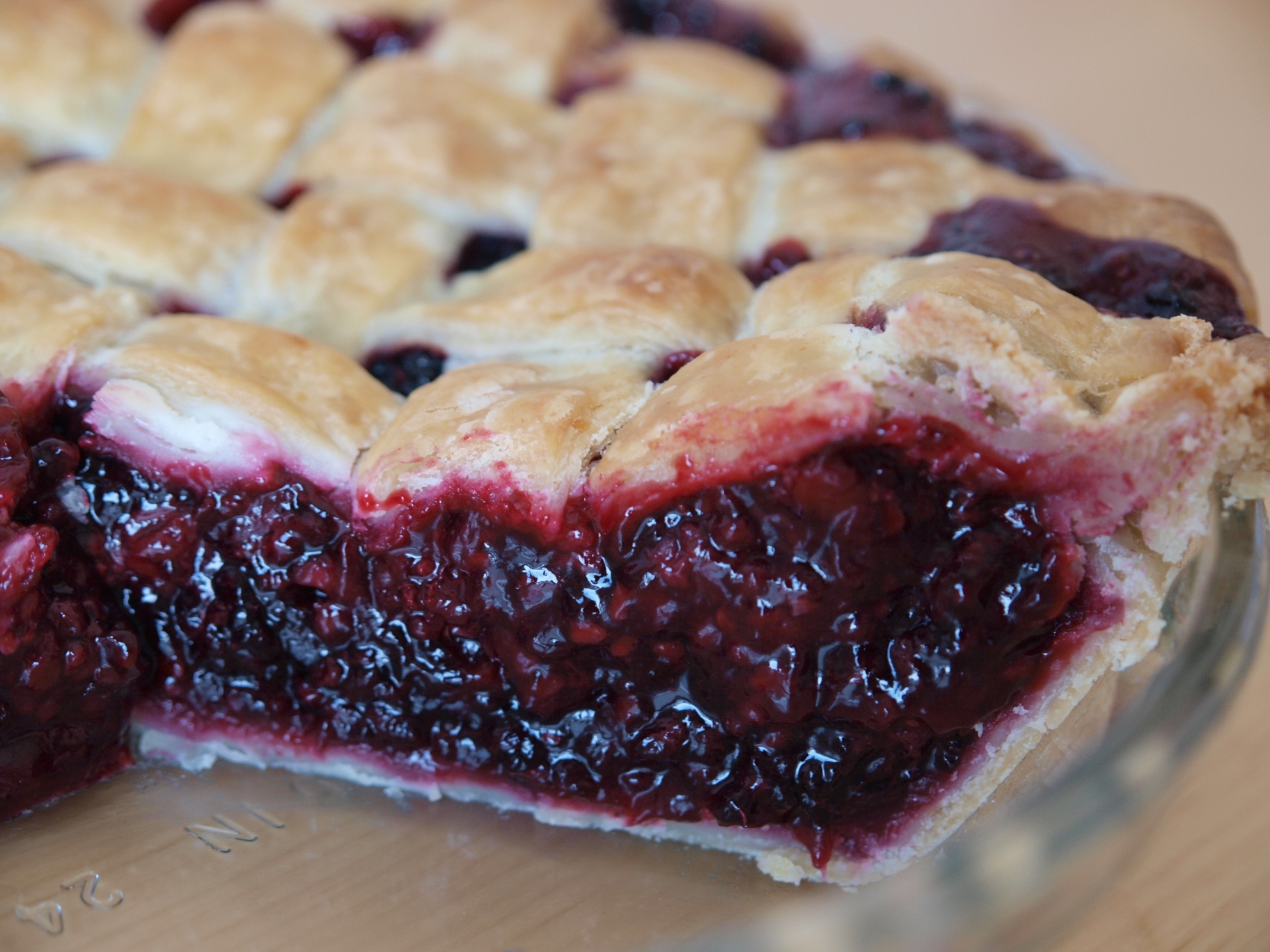 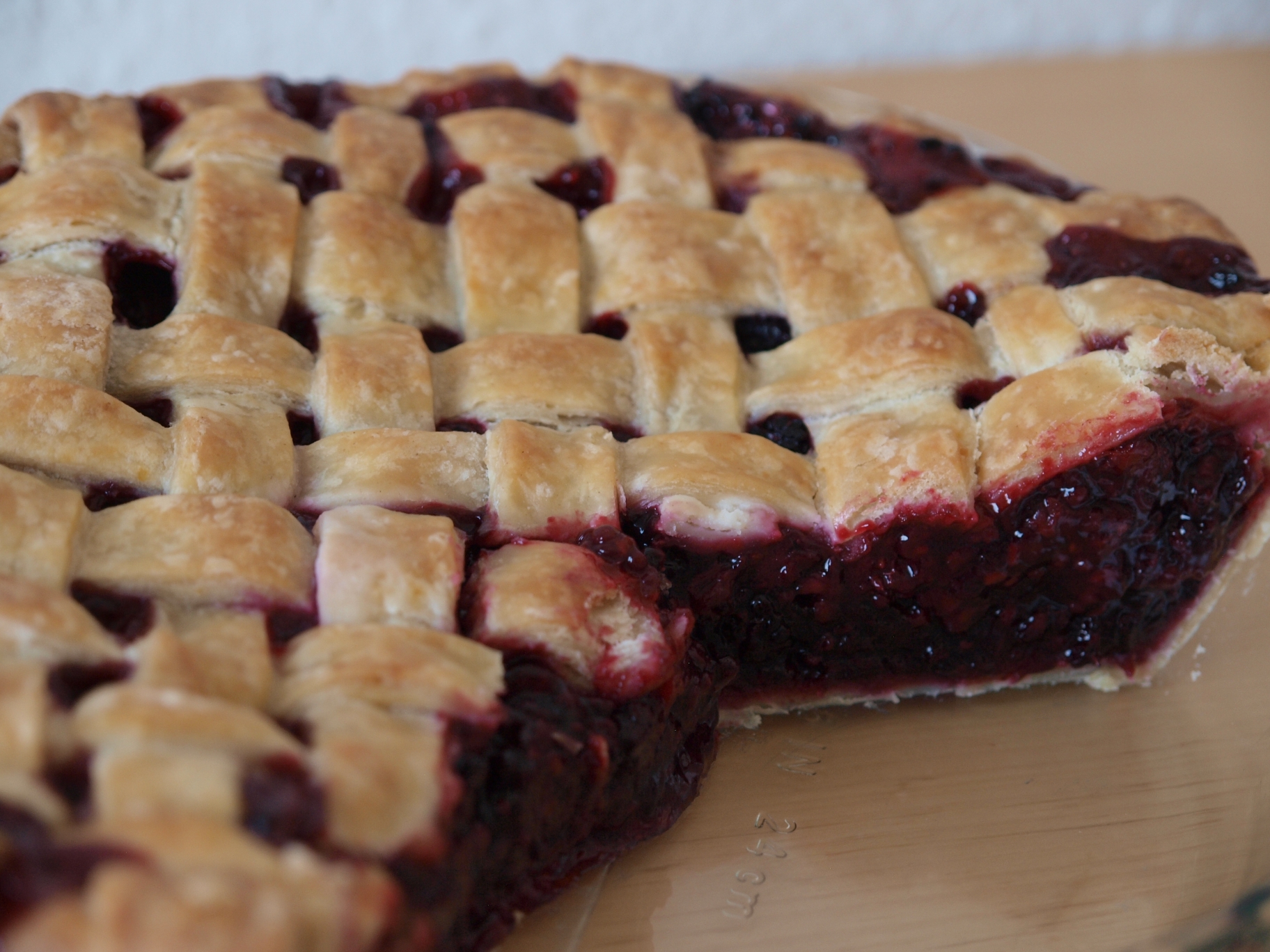 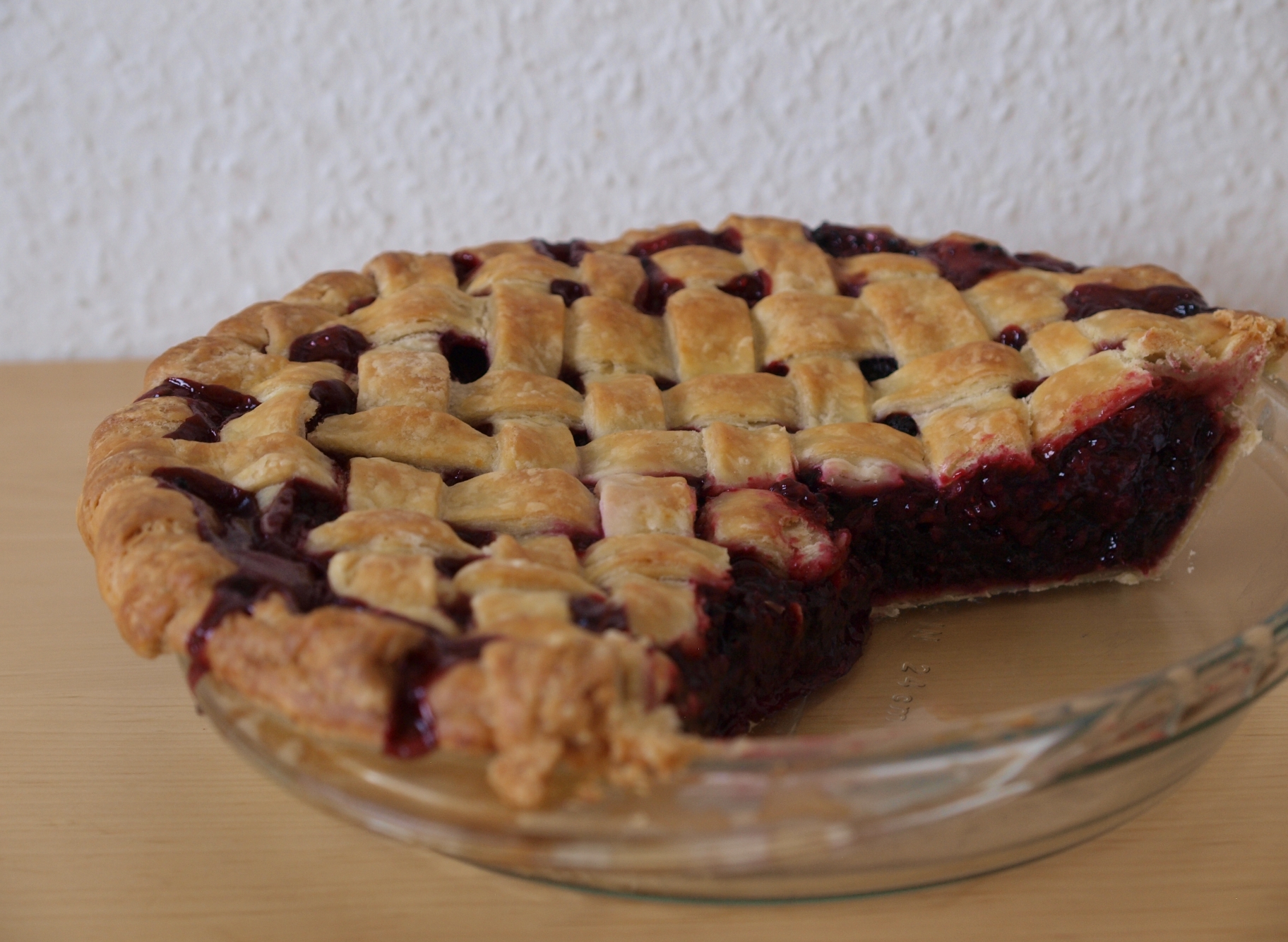 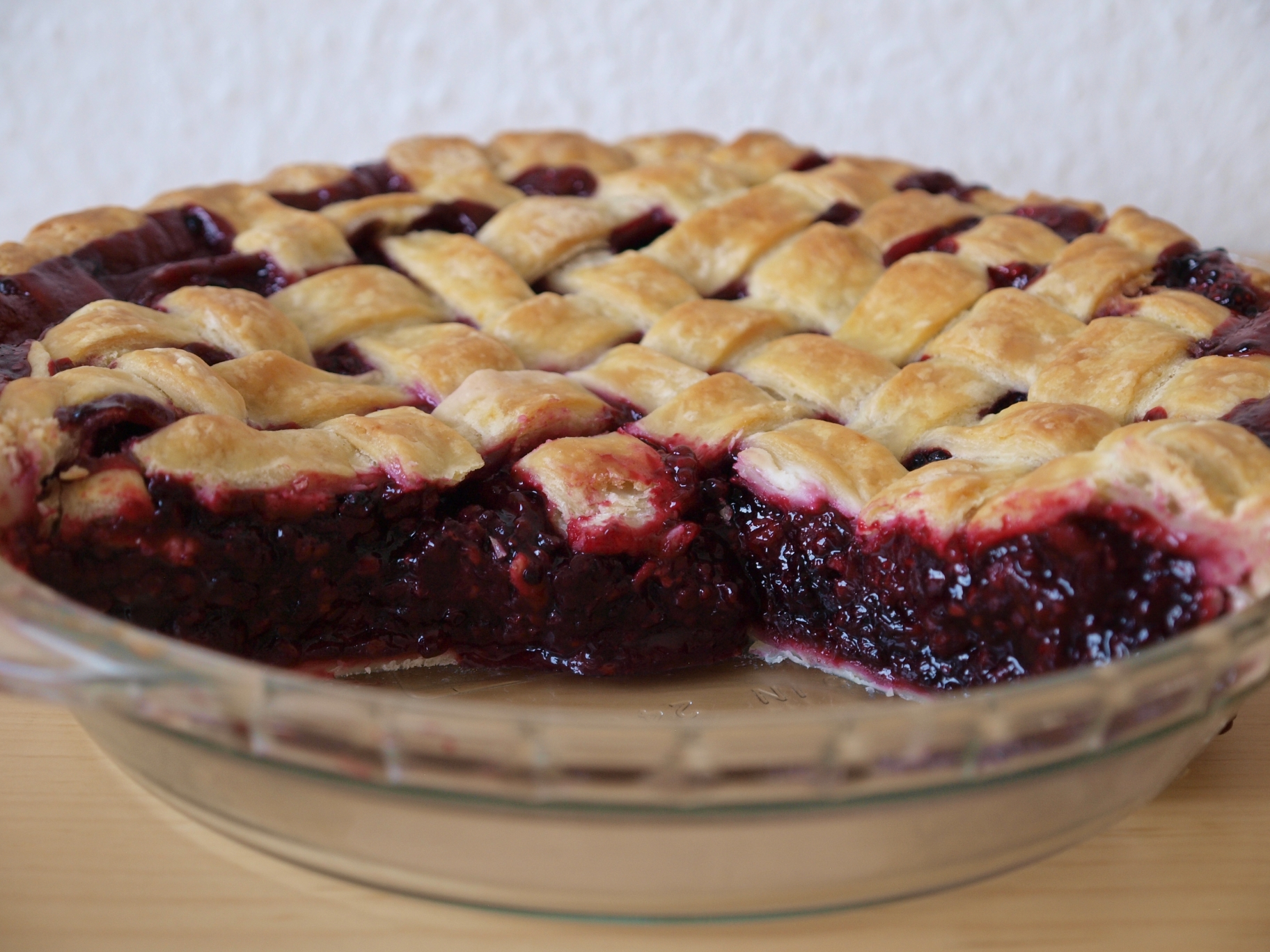