Since I left my teaching job in Rhode Island in March 2010 for a year-and-a-half leave of absence I have:

moved to Germany with my husband and now 14 month old daughter Anna,

started a garden on foreign soil,

learned how to speak German (a little!),

had my subscription to the Cook’s Illustrated magazine shipped across the sea to my home here in Deutschland,

written a lot of letters to friends and family back home in the States,

had more time in the kitchen to prepare the foods which have been coming in from our garden, farmers markets and the weekly town market,

made a LOT of different soups,

experimented with several new dishes which I had never made before (some familiar and some foreign),

made a plethora of calls to the United States,

had two of my brothers come here to visit me,

learned how to deal with homesickness (so far…),

missed Thanksgiving (I’m still planning on a turkey dinner with the turkey that is waiting for us in the freezer, maybe this coming weekend?),

gone to church spoken only in German,

sung church songs and kids songs in German that I also know in English,

been playing with Anna, cooking for her, and taking care of her most of the day,

taken a little time for myself now and then to sew, knit, read, watch a show, go on Facebook, write this blog and make the best cherry pie and maybe the best pie I’ve ever had, period. 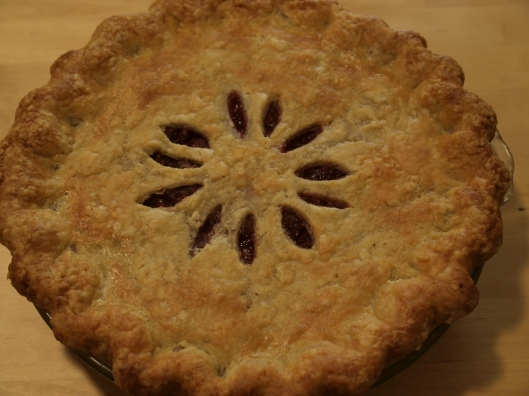 The Best Cherry Pie (and possibly the best pie, period! No kidding.)

1/4 cup cold vodka (do NOT omit, this leaves no taste in the finished crust)

(Put a cup with the vodka and water in it in the freezer to keep it chilled while performing the next steps.) In a bowl or food processor, I always use a bowl and a pastry cutter, blend 1 1/2 cups of flour, salt and sugar. Add the butter and shortening and cut in until the dough has small uneven clumps forming. Add remaining one cup of flour and cut in briefly until incorporated. Add the vodka-water mixture to the dough and fold in with a spatula pressing the dough together until it is slightly tacky and sticks together. Transfer to a lightly floured surface and quickly work the dough together to form two evenly sized balls of dough and then flatten into discs. Wrap with foil or plastic wrap and put in the fridge for at least 45 minutes and up to 2 days. After about an hour remove one of the discs, roll it out to fit in a 9″ pie plate and gently press the dough into the pie plate. There should be a little overhang by about an inch or more. Cover with wrap and put it back in the fridge until you are done with the filling, about another 40 minutes.

1 tablespoon juice from an actual lemon

2 tsp bourbon (optional but I would not omit this if I were you!)

2 tbs instant tapioca, ground in a coffee grinder for about half a minute

1/8 tsp ground cinnamon (optional and I DID leave this out!)

a little milk for brushing the top of the crust

Put a baking sheet covered with baking paper or foil on the lowest rack in the oven and preheat to 400° F. In a blender or food processor puree plums and one cup of the halved and pitted cherries. Strain the puree into a large bowl through a fine-mesh strainer. Compost the leftover skins and solids in the strainer. Stir in the remaining 5 cups of cherries, sugar, salt, lemon juice, bourbon, tapioca and cinnamon (if you want). Let stand for at least 15 minutes. Transfer the mixture into your dough lined pie plate. Don’t worry if it looks a little watery. Cut the butter into 1/4 inch pieces and arrange evenly over the fruit mixture. Roll out the second disc of dough so that it is large enough to cover the pie and hang over the edge a little by at least 1/2 an inch. In the center with a sharp knife cut at least 8 evenly spaced vents in the crust and transfer the crust to the top of the pie. Press the two pieces of dough, top and bottom, together and under to form a little raise wall around the pie. Using a thumb and index finger from one hand and an index finger from the other hand flute the edge of the pie crust by pressing your index finger in on one side of the dough an in between the two fingers on the other side of the dough.  Brush the top crust and the fluted edge with milk. The original recipe calls for the pie to be put in the freezer for 20 minutes before baking. I forgot to do this. I don’t know if this pie can get any better but if you think that it can by all means add this step. Place the pie on the baking sheet and bake for 30 minutes. Then reduce the heat to 350° F and bake for an additional 30-40 minutes or until the crust is a deep golden brown and the filling is bubbling. Transfer the pie to a wire rack and allow to cool at room temperature for 2 to 3 hours. During this time resist the urge to cut the pie before it sets. I covered my pie with foil and kept it at room temperature for up to two days. It tastes even better the next day or two! I don’t know if it will keep when left out longer than that, a pie has never lasted longer than a few days in my house : )

The last slice of pie